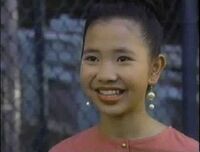 Tina Nguyen was the fifth teenager to see the titular character in the PBS Kids series, Ghostwriter. She was portrayed by Tram-Anh Tran.

Tina is of Vietnamese American heritage. Most of her family came to America from Vietnam to start a new life. As such, Tina was the first member of her family born in the United States. In the meantime, Tina, alongside her best friend Gaby Fernandez, attended George Washington Elementary School. Tina was a young camerawoman for the school's television news team. She and Gaby would sometimes work together and do reports on happenings in their Fort Greene neighborhood (namely a suspicious fire at an electronics store).

Tina was also learning to become an actress and attended improv classes. One time, she served as the secretary for a famous 1940s actress named Lana Barnes.

Gaby's brother Alex Fernandez has a crush on Tina. She permanently ends any possibility of romance later in the series, telling him they are friends. The beginning of their short romance is at the end of the Lana Barnes arc.

In the last story arc of the show, Tina becomes a matchmaker and helps her brother, Tuan, go to the school dance with Lenni, whom he has a crush on. It is unknown if they start dating.

Add a photo to this gallery
Retrieved from "https://ghostwriterteam.fandom.com/wiki/Tina_Nguyen?oldid=10830"
Community content is available under CC-BY-SA unless otherwise noted.