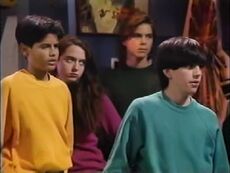 THABTO (an acronym meaning Two Heads Are Better Than One) is a group of four kids from the episode "Ghost Story", who are all professional players of the video game Double Defenders. They all identify each other by the names of the Double Defenders: Mighty Masher (aka Dan, the leader in the light green shirt), Rocket Ripper (the boy in the yellow shirt), Kool Kicker (the handsome boy in the dark green shirt who is very popular with the ladies) and Great Gripper (the only girl of the group). They are also one of the reasons why the Ghostwriter Team was formed.

Dan formed the team with his three friends, (their real names are unknown) they decided to idolize the Double Defenders. To do this, they went to a store called "The Party Animal" run by Calvin Ferguson's family. Then each of them purchased a mask with a green scaly face that was on the front of their face and opposite on the back of their head. This made it look like they had a face at the front and the back. Also, Dan ordered four custom made THABTO buttons from the store and left his phone number. Then they spent several days stealing backpacks from unsuspecting children (including Gaby), but they only took out the money inside them and nothing else. They "needed" the money to continue playing Double Defenders and to practice for an upcoming tournament.

The THABTOs even held secret ceremonies in certain spots in Fort Greene. Jamal saw them having a ceremony while walking home late from the grocery store one night. They saw him and suspected him of possibly being a spy or interfering. Then the next morning, they left him a threatening note on his locker. The message was in normal writing so he would understand it. The message warned him saying "Near the park after dark you were there so beware. THABTO!"

Also, Jamal found one of their secret coded messages. He had the most difficult time decoding it. That was until Alex found out that the letters in secret messages were switched around, so that letters from A-M were actually N-Z and letters from N-Z were actually letters from A-M. They decoded the message and found out their last ceremony was at the corner navy yard on Friday at 7:00 pm. Ghostwriter discovered that Kool Kicker had locker 163 at school. They made him a fake message saying the ceremony was cancelled and to make no contact until further notice. Alex then infiltrated the ceremony by passing off as Kool Kicker, though he had no idea which Double Defender he was.

Mighty Masher, stood before them and they repeated him as he said "With our quarters by our side, we'll do a Double Defenders ride. Then the tournament is ours. All will bow down to our powers. Then know the THABTOS are next to none. TWO HEADS ARE BETTER THAN ONE!" Then they all danced around and screamed and roaring it was scary and disturbing. Eventually, they all signed in by their chosen names. Alex was found out when he identified himself by the wrong name (he called himself Great Gripper, instead of Kool Kicker), they unmasked him and realized they were being infiltrated and spied on. Then the THABTOs chased the team out of the yard, though Mighty Masher and Great Gripper briefly caught Jamal. They cornered him and mentioned that they had warned him for interfering into their business the week before and were about to beat him up, but he quickly hit them both on the heads and ran off back to Lenni's Loft.

The next day (the day of the tournament) after what had happened the night before, the THABTOs (all four of them) still showed up to the tournament. The Ghostwriter Team gathered all the kids that were robbed and had them cornered. Jamal blurted out "Run, Rocket Ripper, run!" and Rocket Ripper turned around to look. A young girl identified him as the one who stole her backpack. That was because when it happened she saw his face when his mask fall off.

Then Jamal mentioned a missing button and asks if it was Dan's, who embarrassingly got his attention. The Ghostwriter team made it perfectly clear that they knew it was them. Jamal also tape recorded the ceremony and played it for everyone to hear. All the kids were furious and upset as they heard it. They tried to get away and Jamal even decided to let them get away. However, the Ghostwriter Team had gotten the police involved and an officer (Mark Linn-Baker) quickly stopped them. They were ordered to pay the victimized kids their money back. And that was the end of the THABTOs' reign of terror.

Add a photo to this gallery
Retrieved from "https://ghostwriterteam.fandom.com/wiki/THABTO?oldid=10811"
Community content is available under CC-BY-SA unless otherwise noted.