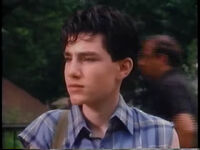 Robert "Rob" Baker (portrayed by Todd Alexander) was the last teen to become part of the original Ghostwriter Team. At first, he was a loner and unwilling to join. But with some positive encouragement by the other team members, Rob settled down and joined with them.

Rob was shy and quiet, and mostly kept to himself. He hailed from a military family and had a touchy relationship with his father, who wished that Rob would play sports instead of write. Rob dreamed of being a writer and spent most of his time writing poems and stories. There were also times when he could be a "man of impulse," often getting himself into dangerous situations. For example, he became trapped in an abandoned subway tunnel with the daughter of a homeless friend named "Double-T"; he was wrangled by a deranged female stunt double; and was nearly beaten up by the Thunder Heads--the gang responsible for the attacks on Hurston students during the "Building Bridges" story arc.

Another instance where Rob was instrumental was helping Jamal bring four disenfranchised team members back together, following a rather nasty misunderstanding involving an accident between Lenni's father, Max, and Gaby and Alex's father, Eduardo. This was a twofold mission: Rob and Jamal had to work against time to bring Lenni, Alex, Gaby and Tina back together to make amends. Otherwise, Ghostwriter--thriving off of the cord that is the Ghostwriter team--would have faded from existence forever.

Rob made his final appearance in the episode "Lost in Brooklyn". The Bakers moved to Australia because Rob's mother landed a job that became permanent. For this occasion, the other team members gave Rob not one, not two, but five notebooks. All of their front pages contained special notes from each one of the team members. Soon after, Hector Carrero (Alex's "Little Brother") filled the hole that Rob had left with his departure from New York.

Rob writes a poem in the computer lab

Lenni and Rob at a Cosmic Comics table

Talking to Double T in the Youth Center 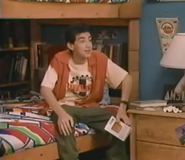 With his father after being rescued from the subway tunnel

Rob with his friend Victor

Writing a letter to help the team
Add a photo to this gallery
Retrieved from "https://ghostwriterteam.fandom.com/wiki/Rob_Baker?oldid=10995"
Community content is available under CC-BY-SA unless otherwise noted.