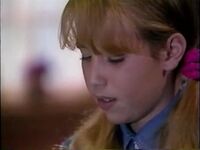 Janice Hall (portrayed by Danielle McGovern) is the villain is the story arc "Who is Max Mouse?". Janice is a brilliant but shy student at Zora Neale Hurston Middle School. One that who nobody notices and bumps into people.

One day she devised a way to get attention by becoming a hacker named "Max Mouse". At home and in school she spent her days creating fake messages, setting off false alarms with the school fire alarms, changing other students' grades, making threats to her own school and getting some students including two Ghostwriter team members (Jamal & Lenni) in trouble by changing their grades and setting them up to seem as if they were the hacker instead. Also she hacked police computers. So she set up Jasmine, to make it look like she was using stolen credit cards

At the Fun House Bulletin Board in her Max Mouse cover, Janice chatted with her fellow students who had their own handles, the team's handle being "LJ Bad". She even challenged them to games on the bulletin board. Janice challenged Calvin (a.k.a. Red Parrot) to a game of Word War, which was played similarly to Boggle. Calvin ended up losing and the team realized that Janice knew that Calvin is Red Parrot. The team also realized that Janice knew they were LJ Bad, or at least Lenni & Jamal.

Then they challenged her to a game of Ghost. She accepted their challenge. However before the challenge started, she made the team a few "promises". She told them that she deleted and stole Jamal's essay for the High School of Science. Then she said she would send it in, but changed filled full of spelling mistakes and bad language. Then she also said that if she won, she would see to it that Lenni would take the blame for all of the actions she did as Max Mouse. She then agreed that if she lost, she would tell them all how she made the false alarms go off at school. Then she played the game and the team won when Janice added the last letter in the word "beautiful". Then she confessed to them how she made the false alarms go off. She made a small program called "Demon". She would install it into a school computer from a disk. So this would set the alarms off. But when the computer was turned off, this program would always disappear. Then the team asked her to reveal her identity to them. But she refused, stating it was not part of their deal.

However the team, had already found out what her computer's phone/modem number was. Because of her, Calvin was cleared. But they still had two more suspects to whom it may have been: her and Erica Dansby. Eventually the team kept her connected to cyberspace long enough for Ghostwriter to help them find out she was using the computer phone number, revealing her to be Max Mouse. Then they revealed to her that they knew she was Max Mouse. So Lt. McQuade was called and she was arrested and charged by the police.

Her stated motive for the crimes, which she admitted to Lenni and Jamal, along with the rest, was that "Nobody notices Janice, but you can't ignore Max Mouse! can you?", shocking the team.

Retrieved from "https://ghostwriterteam.fandom.com/wiki/Janice_Hall?oldid=10810"
Community content is available under CC-BY-SA unless otherwise noted.