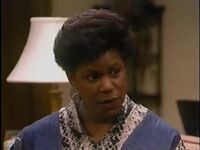 Cecilia "CeCe" Jenkins (portrayed by Marcella Lowery) is Jamal, Danitra, Cheryl & Casey's grandmother, Emmaline (Casey's mother) and Reggie's mother and Doris' mother-in-law. She is a mail carrier in Fort Greene where the show took place. When not giving out the mail, she looks after Jamal & later Casey. CeCe is there to make sure she gets the best of her grandchildren. Also as evidenced in "Over a Barrel", she is a total neat freak and makes her family clean up around the house. She has a sense of humor as well as wisdom to help out her family. Despite not knowing about Ghostwriter, CeCe can sometimes be of assistance to the team.

Notable side stories for CeCe

CeCe and the Family

Add a photo to this gallery
Retrieved from "https://ghostwriterteam.fandom.com/wiki/Grandma_Jenkins?oldid=10986"
Community content is available under CC-BY-SA unless otherwise noted.