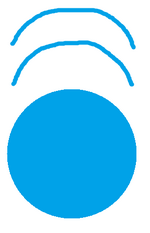 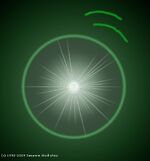 Ghostwriter is the titular character of the classic hit children's series Ghostwriter.

When the show began, little was known about Ghostwriter (or "GW"). He just, as Jamal simply put it, "showed up one night." Ghostwriter flew out suddenly from within the pages of an old book lying dormant in Grandma Cecelia's basement, and began writing to Jamal while he was using a new computer given to him by his older sister Danitra.

To begin with, ghostwriter was lonely, scared and worried about children. He asked, "Help, help, help! Where are the children? Are they all right?" These and many other questions went unanswered for a time, as Jamal (and eventually Lenni Frazier) did not know how to answer their new friend. After some time, Jamal deduced that since this ghost was writing to them, maybe they should write back to him. The two kids wrote to GW, telling him not to be afraid and that they will be his friends. So, with a "Thank You" from the ghost himself, the adventures began.

Eventually, he started writing to Alex, his sister Gaby and later to Tina. Each of them (excluding Alex) were told to sit down so that those who already know about "GW" can explain. The kids wondered where he came from.

Ghostwriter was a shadowy figure, in every sense of the word. His true nature was never really explored during the duration of the series. From what the Ghostwriter Team learned:

Add a photo to this gallery
Retrieved from "https://ghostwriterteam.fandom.com/wiki/Ghostwriter?oldid=11006"
Community content is available under CC-BY-SA unless otherwise noted.