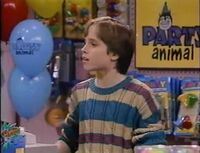 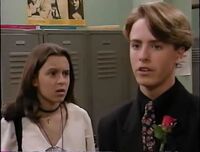 Calvin Ferguson (portrayed by Wil Horneff & Joey Shea), served as the arch nemesis to the Ghostwriter Team. Calvin set his sights on the team when they cracked the THABTO backpack theft case. To him, it was an impressive accomplishment... so much so that Calvin wanted to find out just how Jamal Jenkins, Alex Fernandez, Lenni Frazier and company pulled it off.

Calvin first appeared in "Ghost Story," the flagship storyline for Ghostwriter, and was played by Wil Horneff. He, along with his mother, operated a local party store aptly called the "Party Animal." He also had a pet parrot named Attila. Upon hearing that his primary rival Alex, along with others, helped in solving a stolen backpack mystery, the details behind this were almost too tasty for young Calvin to pass up. Therefore, in the last episode for this storyline, he vowed to Jamal that he would eventually find out.

From the Arc "To Catch a Creep" Calvin from then on was played by Joey Shea. In this arc he was working as campaign manager for a shy and soft-spoken Hurston student named Jeffrey Baxter. You see, Hurston was holding a student body presidential race, and Alex had volunteered to run. But someone began posting some ruthless "smear fliers" about Alex around Hurston's halls! To make matters difficult, a new transfer student recently arrived at Hurston. His name was Rob Baker. For a while, Rob was suspected of posting the smear fliers. But, far be it from Ghostwriter to sit out of this one. From the start, he led the team towards finding who was posting the fliers. For a time, there were four suspects in the GW Team's viewfinder: the aforementioned Jeffrey Baxter, Neetu Kapoor, Janet Williams (these three were rival student presidential candidates) and Rob Baker.

After a lengthy investigation into this matter, Neetu, Janet and Jeffrey were cleared from the suspect tally. Calvin, however, was found having campaign parties on school property. Alex begun to suspect Calvin when he didn't seem to sorry at all about what was happening to him.

It was later revealed that a pen pal of Alex's named Katherine Brody from Texas knew most of his secrets, because he felt it was easier telling pen pals more private and personal things because they lived so far. Alex and the team discovered after he skimmed through his received pen pal letters to find who he told the secrets too and after he and the team phoned Katherine Brody pretending they were a music company and that she had won special concert tickets she revealed to them that the relatives to take her to the concert where she was told it would be nearby was the Ferguson Family revealing that she was Calvin's cousin from Texas.

They first confronted him about it at school and how they knew he was about to make another a smear flyer with a picture of Alex as a toddler in a clown costume he was shocked because not even his cousin knew that one was going to be next. Calvin then revealed to them that had it planned since the previous year that he wouldn't want his school to be run by Alex who to him was "Mr. Popularity" so he wanted to find a way to bring him down and see to it he would never win the school election and he didn't care about running himself or winning he just didn't want Alex to win.

Since he heard that Alex has so many pen pals he found out by sheer luck that one of Alex's pen pal's was his cousin Katherine Brody from Texas who he was very close with and owed him a favor of some sort. Then she kept sending him personal and private facts about Alex. He first told them he wasn't gonna stop unless Alex stepped down and Katherine would just deny it. So that night since the Fergusons would recognize them the ghostwriter team had Rob the new guy stop by the party animal store and listen to Calvin's mother brag on and on about how "wonder" a boy he was and some cute and embarrassing facts about him.

The team then made a few funny and embarrassing fliers about him such as "Calvin caught with pants down" and "Calvin's batty about his booger bat" they pinned a few copies around a secluded room in the basement off the school where Calvin was running his campaign office for Jeffrey on school ground without permission and against school rules.

Alex at first that morning begged Calvin to let him come with him to his office to write a quitting the election speech and begged him not to put up the new smear flyers. At first Calvin felt happier than a clam in mud. then as they entered the room he was in shock and horror to see the smear flyers of him posted all over the room. Calvin was then told unless he stopped his smear campaign and confessed to Principal Kelly they would put them up all over the school making his life and reputation miserable.

At first Calvin asked how they found it out they told him they were just as smart as he was which he told them he didn't believe them and he refused to believe they were gonna do it believing them to be to nice, until Jamal confronted him with a big cardboard box full of them. Panicked he then came clean to the principal. He was immediately fired as Jeffrey's campaign manager and he received a one week suspension from school before he left for his suspension he demanded the box full of smear flyers to where Lenni and Jamal reveal was holding another box taking about 95% of the room and only a few papers were in it and he was told they wouldn't have stooped as low as he did.

In the "Am I Blue" story arc, Jeffrey decided to give Calvin another chance and be friends with him again and they were both going to dressed up as blue makva's for the special galaxy girl convention taking place at Brooklyn that week and he sold Gaby a galaxy girl costume, but wouldn't give her a refund because the costume was on sale, causing a lot of problems for Gaby because she stole money from her parents to buy the costume and was going to return it and get a refund after the convention. Then it seemed that Calvin was about to close in on the Ghostwriter Team when Alex's casebook fell into Calvin's hands because he and Jeffrey discovered that Alex and his friends had an invisible friend "GW" that could read things from them no one can always see from anywhere to help them find something or someone and write out hidden messages to help them. He was furious when he found his name among the list of suspects who might have stolen the Cutesie ship model from the Hurston Middle School stage. Later, Alex, Tina and Rob paid Calvin a visit at his store where he seemingly admitted to stealing the ship. Of course, he was later cleared. Then Jeffrey feeling bad about taking Alex's casebook and reading it with Calvin dropped Calvin as a friend again and didn't seem to associate with him again after that.

In "Get the Message" Calvin's "war" against the team would later take a personal turn. At the time, the team was severely divided over an accident involving Max (Lenni's dad) and Mr. Fernandez (Gaby and Alex's dad). Their fighting became so intense that Ghostwriter began to fade away! Calvin, on the other hand (having seen the letters "GW" in Alex's casebook), used the arguments to his advantage. One day, while the Hurston computer lab was empty, Calvin switched the wires to two of the computers and waited for Rob to enter. Suddenly, Ghostwriter began to speak to Rob, but the ghost looked nothing like he usually does while inside a computer. When Rob asked, "What's wrong, Ghostwriter?", he inadvertently gave Calvin the one clue he needed to make a his impact.

What an impact he made! Somehow, in the middle of the accident dispute, Lenni, Alex, Gaby and Tina received letters to meet each other in the park to talk about their problems. When they arrived they found new letters that, when opened, read "Ha ha ha!" It was all a trick. Little did anyone know that it was Calvin's doing all along.

Later, Rob and Jamal confronted the other four team members about their constant fighting and what it was doing to Ghostwriter. Rob informed them that whoever wrote the fake meeting letters was likely the same one who sent Rob a fake letter from "Ghostwriter." So, when the team resolved their differences with each other, they made it their business to not only find who caused the accident between Mr. Fernandez and Max, but who was sending Rob fake Ghostwriter notes. The following day, the "bogus" Ghostwriter struck again. Rob had a hunch that he knew who this phantom was--Calvin Ferguson! Rob later revealed that he might know how Calvin found out about Ghostwriter--that day in the computer lab where it was just Rob and Calvin. Calvin then published to Rob that he knew about Ghostwriter, and he even tried to make Rob a member of a new "team." Rob, though tempted, refused and blindsided Calvin. Alex and Lenni suddenly popped out from behind the lab door. They said that Ghostwriter would never write to the likes of Calvin. Calvin was not fazed, and the last thing he said was "Never say never!"

That was the last the team saw of Calvin until the story "Who is Max Mouse?" Calvin was suspected of being a hacker who was causing major trouble at Hurston. There were false fire alarms, fake death messages, unexplained grade changes, the works! Later, Calvin was cleared of that rap but he didn't appear to want anything to do with the GW team after a while. He only wanted to take Lenni out for a milkshake because he now has a crush on Lenni and It turns out that Calvin's longtime pet parrot Attila died. (However, when Calvin had been working to further sabotage the Ghostwriter team during "Get the Message" there was a moment that he acted unusually kind and friendly with Lenni, who was crying about her crumbling friendship, indicating that he maybe had the crush on Lennie before now) Besides him revealing that he wanted a date with Lenni via an online chatroom, that was the last viewers saw of Calvin...

Until, at least, the next-to-last story, "Four Days of the Cockatoo." When Gaby found a rare palm cockatoo in a back alley trash dumpster, Calvin was all too eager to observe the exotic bird and get the reward for its return. When Gaby (and later the team) rebuked Calvin's wiles, he stormed out of Lenni's front door and that was the final time anybody saw Calvin Ferguson on-screen.

Of course, the following story ended up being the last case for the Ghostwriter Team, which meant no final confrontation between arch rivals.

Retrieved from "https://ghostwriterteam.fandom.com/wiki/Calvin_Ferguson?oldid=10896"
Community content is available under CC-BY-SA unless otherwise noted.