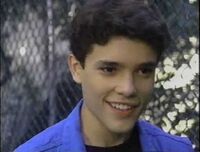 Alejandro "Alex" Fernandez, was the third teenager to see Ghostwriter. He had a natural affinity for mysteries. The character was portrayed by David Lopez.

Alex and his younger sister Gaby Fernandez lived with their parents in the family's corner store, or bodega. He and Gaby shared a bedroom, with a dividing curtain in the middle for privacy. At the end of the second season, he and his dad build him his own bedroom in one of the spare storage rooms.

He was also into basketball and reading mystery novels and, as pointed out early on in the series, Alex was a gifted code breaker. This was why Jamal Jenkins approached Alex at the local arcade with a weird code that he found while walking to school one day. Jamal heard noises in a nearby park and went to investigate. Turns out, "beings" that appeared to have two heads were frolicking around and screaming incoherently. The following day, Jamal went back to that spot in the park and spotted two things: a message written in code and a green button with the word, THABTO, written in front. When Gaby's backpack was stolen, she found a coded message also.

Alex proved instrumental with solving the coded messages left by the backpack thieves and determining where they purchased their equipment from. He, along with the other members of the team, infiltrated a ceremony held by the thieves themselves. It went well, except that Great Gripper was a girl. Busted! Alex and the team wasted no time an bolted for an open window to escape.

As the story goes, the thieves were later caught and confronted by their victims and the police at the arcade.

Some time after this, Alex wanted to run for student body president at Hurston. But there was someone going about posting smear flyers about Alex all over the walls of the school. So, when Ghostwriter and the team put there heads together, the trail of suspicion lead to Calvin Ferguson--the same boy who was working the register at the Party Animal store a while back. The score was settled when the team threatened to give as good as Calvin gave, and post smear fliers of him around Hurston. Calvin, seeing that his soon-to-be archenemies were serious about their smear campaign, relented. He was later punked when he found that a supposedly full box of fliers was really about 10-12 fliers.

At one time, Alex kept on calling Tina Nguyen, who he had a crush on, while she was at work in Lana Barnes' apartment. But everytime he called and Tina answered, Alex hung up because he didn't know what to say. So instead, after a chat with his father, he wrote a movie script describing his love for her.

Furthermore, Alex was seldom prone to bouts of anger. This was evident when Alex shirking his chores at the family store and missing important project deadlines at school. Then came a likely cause: Alex had spent time with another student named Kevin Michaels, head of a local basketball team who also was shirking his responsibilities. Kevin was also using marijuana on the side. Things came to a head when Kevin missed a game for his team, the Dragons. The Dragons had to forfeit a tournament because of Kevin's absence, and Alex and another member named Spencer confronted Kevin about both his lack of effort for the team and his using drugs. Kevin was later mugged, and then beaten, by an apparent rival. The other Dragons member, Spencer, was later revealed as an accomplice for Kevin who was stealing property from students at Hurston.

During the final story arc of Ghostwriter, Alex, Lenni and Jamal graduated from Hurston.

Add a photo to this gallery
Retrieved from "https://ghostwriterteam.fandom.com/wiki/Alex_Fernandez?oldid=9384"
Community content is available under CC-BY-SA unless otherwise noted.